I've always wanted to learn how to play the guitar. I envied people who do covers on Youtube - I always thought 'I could do that, I could be cool like that'. The first song I've attempted to learn was Leaving on the Jetplane - easy chords: D-A-G-A. Melody and lyrics were easy too so, I was confident that I can learn this one song.
That was a fail - I could do the chords but I had trouble with the strumming. It was frustrating and the guitar was too big for my small hands. I know - excuses. Because of this, I gave up my dream of learning to play the guitar or any musical instruments for that matter.
I've toyed with the idea of buying a ukelele within the last year or so but it gave me more reason to get one and learn how to play since I am always at home. So Hubby decided to get me a ukelele as a birthday/wedding anniversary gift.
What I'm about to say still blows my mind up to now.
I can actually play, sing, use, strum the ukelele. This is not just a down strum deal, I can do an island strum (DDUUDU), work through the chord progression while singing.
I bought ukelele accessories this past weekend, I have a song/chords notebook and before I even decided to write this post, I finished watching a ukelele tutorial for Love Story by Taylor Swift. TAYLOR SWIFT. AM I EVEN REAL RIGHT NOW? WHO AM I? 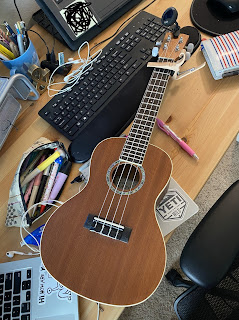 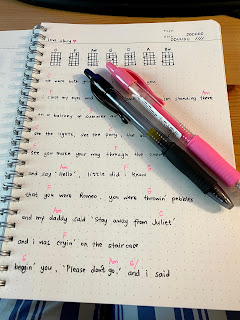 Last night, my father in law called me because he heard that I can play Moon River. I sang that and Can't Take My Eyes Off You for him, on the phone. What.
So yeah, I guess I'm cool now? LOL.
P.S. You can follow me on Instagram if you want: @mimaycovers_ :)
By mimay_ at 21.10.20
Email ThisBlogThis!Share to TwitterShare to FacebookShare to Pinterest